Embattled Liz Truss is facing a potentially humiliating make-or-break Prime Minister’s Questions which could determine how long she can survive in office.

She will be confronted by Labor leader Sir Keir Starmer for the first time since new chancellor Jeremy Hunt dramatically tore up her tax cuts policy – and could even face calls from rebel Tory MPs to go.

A week ago at PMQs, Ms Truss made a number of bold commitments, including “absolutely” no spending cutsbut these have all been jettisoned by Mr Hunt, leaving her position perilous.

MPs still loyal to the PM fear that if she performs as badly as she did in her disastrous eight-minute Downing Street news conference last Friday she could be forced out in weeks.

Starmer: ‘Everyone gets to be PM for 15 minutes’

and when MS Truss failed to appear in the Commons on Monday to answer an urgent question from the Labor leader on the turmoil he quipped: “The lady’s not for turning-up.”

But although the number of Conservative MPs publicly calling for Ms Truss to go remains at just fiveshe is now facing a damaging backbench rebellion over a Downing Street U-turn on pensions.

Former health minister and ex-nurse Maria Caulfield angrily declared she would not vote to end the triple lock, which Downing Street refused to rule out as Mr Hunt plots massive spending cuts.

Backed by Steve Double, briefly a junior minister until sacked by Ms Truss, Ms Caulfield protested: “Pensioners should not be paying the price for the cost of living crisis whether caused by the war in Ukraine or mini-budgets.” The triple lock, a policy that means the state pension must rise each year in line with inflation, average earnings or 2.5%, whichever is higher, was a pledge in the 2019 Tory manifesto and by Ms Truss in her leadership campaign.

If pensions were to rise in line with earnings instead of inflation, that would mean an increase of 5.5% rather than 10%, costing pensioners £8.35 a week or £434 a year and saving Mr Hunt £4.5bn a year.

‘We are going through hell’ – Gove

Earlier, in a brutal onslaught, the PM’s arch-critic Michael Gove was asked at an event if it was no longer a question of whether Ms Truss goes but when she goes and he replied: “Absolutely right.”

Declaring “we are going through hell”, he added: “The question for any leader is what happens when the program or the platform on which you secured the leadership has been shredded.”

In a sign of the PM’s waning authority, Sky News was told that out of 40 Tory MPs invited to an eve-of-PMQs reception at 10 Downing Street only about 10 turned up.

Those who did attend were largely supportive, however. Senior backbencher Mark Pritchard said as he left Downing Street: “I don’t think you have seen last of Liz Truss. I think she will lead us into next election.”

‘Changing PMs now would be ridiculous’

Another senior MP present, Ian Liddell-Grainger, said: “We were very blunt about where we feel we are.

“There were not many colleagues there. We were having a great conversation. Changing horses at this stage would be ridiculous.” Can Liz Truss survive in office?

The PM also received a warm reception when she attended a 40-minute meeting of the pro-Brexit European Research Group (ERG) of Tory MPs at the Commons.

She won the approval of the group with pledges on the Northern Ireland protocol, scrapping EU laws, raising defense spending and remaining committed to high growth despite the “painful” U-turns on tax cuts.

“There was a great deal of support and indeed empathy for the prime minister,” ERG chairman Mark Francois told Sky News after the meeting. “She spoke well. She carried the room.”

But in another potential blow for Ms Truss, the executive of the powerful backbench 1922 Committee is meeting after PMQs faced with demands from MPs to scrap a rule that protects a prime minister from a challenge for a year.

Some Tory MPs who want to force Ms Truss out claim the committee chairman Sir Graham Brady has already received over 100 letters demanding a no-confidence vote, but that claim is hotly disputed.

In a highly unusual move that prompted further questions about the PM’s future, however, Sir Graham met Mr Hunt ahead of his scheduled appearance before the committee later in the afternoon.

Readmore:
Minister warns Truss cannot afford any more mistakes
Truss says sorry for ‘mistakes’ in first weeks in office
What was in the mini-budget and what has been scrapped? 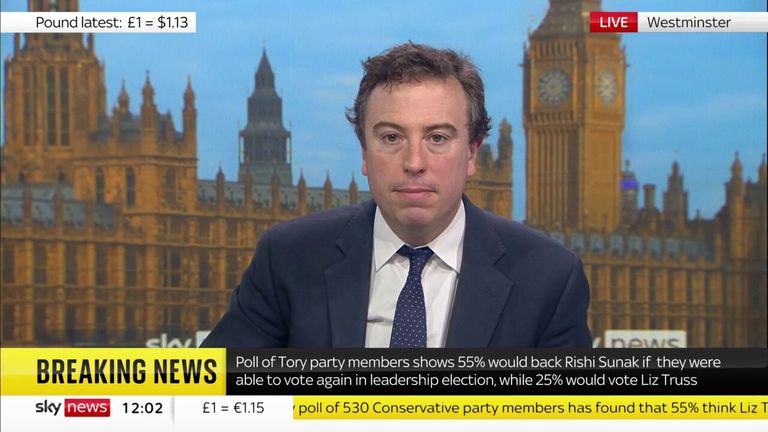 Earlier, in a sign that support from party activists is haemorrhaging, a poll suggested 55% of Conservative Party members want her to resign and only 38% want her to remain as prime minister.

And in a stunning finding that has sent shock waves through the party, the same poll – by YouGov – suggested Boris Johnson is the most popular choice to succeed her.

Almost one in three, 32%, wanted Mr Johnson to take over, followed by 23% for defeated leadership candidate Rishi Sunak and 10% for Defense Secretary Ben Wallace.

This will be Ms Truss’s third Prime Minister’s Questions and she and her allies will be hoping it does not turn out to be her last.