“I think it’s a civil war,” Zach Scherer told me.

We were sitting on her back Asset-brand pickup truck earlier this week when he made the prediction.

“I think that’s the only thing that will bring America together after this election if we lose.”

Civil war? When I moved to America a year ago, I remember people raising this fear. I remember thinking they were crazy. How could anyone believe that the “world’s largest democracy”, as it is sometimes affectionately called, could be heading for a civil war?

I have reported on many failing or failing states over the years. It seemed absurd to suggest that the United States of America could be included.

Well, a year later, my perspective is changing and I’m deeply concerned.

Armies and front lines are not formed in the traditional sense. But make no mistake, there are armies and there are front lines. The fault lines are alarmingly deep. It would be wrong to think that America can navigate its way through this inflection point in its history.

A recent poll suggests that a growing number of Americans think political violence is acceptable. Just last week, the husband of the nation’s third most prominent politician, House Speaker Nancy Pelosi, was assaulted at home. Police say she was the target.

On the same day as the attack, authorities warned that threats of violence against politicians across the country had massively increased.

The nation is bitterly divided and there is one thing driving this unrest – around a third of people of voting age in this country believe the 2020 election was stolen. They believe Donald Trump has won.

Doubt sown in the fabric of American society

If you’ve spent the past two years thinking that was a fringe opinion peddled by a former president; a prick that can now be dismissed as background noise, think again.

Doubt has been sown in the fabric of American society. People have been duped. They reject the institutions on which American democracy was built. They were told not to trust their electoral process.

Back on the van, Mr. Scherer’s friend, Corey Check, was angry. These two young followers of Mr. Trump firmly believe that the election was stolen by Joe Biden and the “woke radical left”.

Shaken by their austere predictions, I sought out another generation of Republicans in hopes of a more measured and nuanced perspective.

Local activist Cindy Hilderbrand had invited me to meet a group of six friends and activists at the local Republican Party headquarters.

My first question – how many of them thought Mr. Trump was the rightful winner in 2020? All their hands went up.

He was interrupted by another member of the group, Cheryl Guenther: “…and it wasn’t just the Election Day shenanigans. It was all that led up to this. The suppression of information, the suppression of everything that’s happened, has by the media. The media is nothing more than a democratic arm helping to suppress all this information.”

To be clear, there is no evidence that the 2020 election was fraudulent. Audits, recounts and court cases in states across the country have concluded that nothing happened that would have changed the outcome of the election. Mr. Biden won by a wide margin.

Even Mr. Trump’s closest aides and his own family said he lost. Yet he persists and his followers believe him. 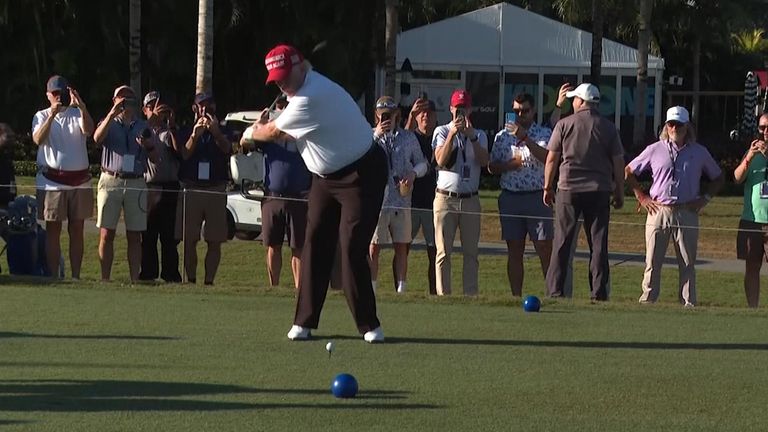 Our conversation turns to political issues. On abortion, on crime, on drugs, on guns, on the economy, they all have perfectly legitimate conservative views. Basically, abortion is wrong, crime and drugs are out of control, gun control is unconstitutional, and the struggling economy is Mr. Biden’s fault.

But here’s the problem. They believe they can’t get what they want on these political issues, not because a majority disagrees with them, but because a minority stole the last election from them. .

Was this idea of ​​a threat to democracy exaggerated, I asked.

“I think maybe it’s understated. I think there’s a real threat to democracy in this country and that really scares me,” Ryan told me.

“I don’t want to end up like what we have seen in Europe in the past. If we don’t learn from history we are doomed to repeat it and we have to keep democracy going to continue otherwise we are going to falter too . I’m worried.

As America heads to the polls for this mid Road take over the country, the anger and division cannot be overstated.

Reflecting on all the conversations I’ve had, it’s overwhelming and disconcerting.

So many things are happening; so many problems and there is absolutely no trust for the other side. There is anger and a feeling of betrayal, but I also felt fear. There is a real feeling that Americans on all sides do not know what is coming next or how they will react to it.