The British economy must be helped away from its “immigration dependency”, Sir Keir Starmer has said.

The Labor leader gave a keynote speech at the Confederation of British Industry’s (CBI) annual conference this morning, calling for businesses to focus on “investing more in training up workers who are already here”.

And he warned bosses that “the days when low pay and cheap labor are part of the British way on growth must end”.

But he insisted he would be “pragmatic” on skills and labor shortages felt by firms, and would improve on the existing points-based immigration system – brought in after Brexit.

Asked if he wanted to bring down immigration, Sir Keir said he would not commit to “arbitrary” numbers.

“[If] one of the big drivers is skills failure, then I think we need to address the skills issue rather than just talk about arbitrary numbers,” he said.

“That does mean if we get this right then immigration will go down in some of those areas that are overly reliant on immigration, but equally we’re not going to hold businesses back if there’s innovation, technologies, where we do need talent from abroad .”

Jonathan Reynolds says that migrant workers should be welcomed, but not relied on as ‘sole answer’ to shortages.

The Labor leader’s speech comes a day after the CBI chief Tony Danker called on the government to use immigration to solve worker shortages in the UKsaying it must be “practical” on the issue.

Brexit stopped many foreign workers being able to easily work in the UK and companies are struggling to recruit – especially in industries such as hospitality, which has relied heavily on European staff in recent years.

Mr Danker told the conference the UK’s labor shortages were “vast”, adding: “It’s time to be honest – we don’t have the people we need, nor do we have the productivity.”

But addressing the CBI on Monday, Prime Minister Rishi Sunak insisted the UK had “one of the world’s most attractive visa regimes for entrepreneurs and highly-skilled people”, adding: “The country’s number one priority right now when it comes to migration is tackling illegal migration.” CBI: ‘We really don’t know how we are going to get growth going’

Speaking in Birmingham, Sir Keir said he wanted his party was pro-business and wanted to work together for a “fairer, greener and more dynamic Britain” where “aspiration is rewarded”.

Trying to distance himself from his predecessor, Jeremy Corbyn, he told delegates: “This is a different Labor Party and there is no going back. We’re ready for partnership.

Appearing to directly address Mr Danker’s remarks, he also said a future Labor government under his leadership will be “pragmatic” on the basic shortage of people and will not ignore the need for skilled workers to come into the country.

“But I want to be clear here – with my Labor government, any movement in our point-based migration system, whether via the skilled occupation route, or the shortage worker list, will come with new conditions for business,” the Labor leader will say.

“We will expect you to bring forward a clear plan for higher skills and more training, for better pay and conditions, for investment in new technology.

“But our common goal must be to help the British economy off its immigration dependency. To start investing more in training up workers who are already here.”

Sir Keir added: “Migration is part of our national story – always has been, always will be. And the Labor Party will never diminish the contribution it makes to the economy, to public services, to your businesses and our communities.

“But let me tell you – the days when low pay and cheap labor are part of the British way on growth must end.

“Now, I know most businesses get this. But when we look at our economy as a whole, it can seem like we’re more comfortable hiring people to work in low paid, insecure, sometimes exploitative contracts than we are investing in the new technology that delivers for workers, productivity, and our country.

“And we can’t compete like that. Britain’s low pay model has to go. It doesn’t serve working people. It’s not compatible with grassroots growth.

“The three big priorities for my Labor government, the principles our partnership must deliver to drive Britain forward, are: one – economic stability, two – higher skills, three – green growth.

“I’ll put it simply: every business in this room has a strategy for growth. A nation needs one, too.”

On Monday, Rishi Sunak reiterated his commitment to Brexit in his CBI conference speech, amid reports the government could be seeking a closer “Swiss-style” deal with the EU.

A report in the Sunday Times this weekend claimed some in government were looking at pursuing a new deal with the EU similar to that of Switzerland to try to improve economic ties – especially after recent market turmoil that has damaged the British economy and the ongoing issues with the Northern Ireland protocol.

That agreement sees the Swiss have selected access to the single market and removes checks on many goods, but means they are part of the Schengen common travel area and pay into the bloc’s coffers.

But the prime minister said he was “unequivocal” that he would not return to any alignment with EU laws, adding: “I voted for Brexit, I believe in Brexit and I know that Brexit can deliver, and is already delivering enormous benefits and opportunities for the country.” 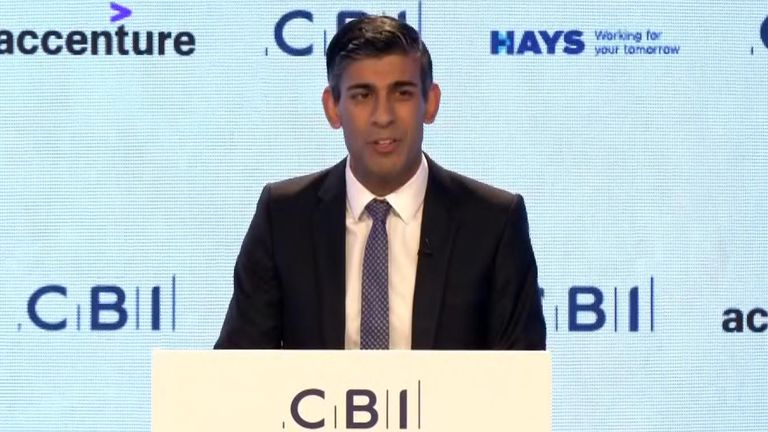 PM: ‘I believe in Brexit’