Public anger in China over continued COVID-19 lockdowns has sparked rare protests in a number of major cities in recent days, with some protesters calling on the Communist Party to stand down.

The latest protests have been sparked by a fire in a high-rise building in the northwest region of Xinjiang Thursday.

The fire, in the city of Urumqi, has killed at least 10 people, and questions have been raised about whether ChinaThe strict containment policy prevented residents from escaping the flames.

Officials deny this, and a fire department spokesperson has inspired further anger after appearing to blame residents for not being able to “save themselves”.

Many Chinese cities have been under strict lockdown for months – many of Urumqi’s four million residents, for example, have been unable to leave their homes for any reason since August.

On Saturday evening in Shanghai, police used pepper spray on around 300 protesters who had gathered on Middle Urumqi Road with flowers and candles and holding signs reading “Urumqi November 24” in memory of the victims of the fire .

A protester who gave only his last name, Zhao, told The Associated Press that one of his friends was beaten by police and two friends were sprayed with pepper spray.

He said the police stomped on his feet as he tried to stop them from taking his friend away. He lost his shoes in the process and left the protest barefoot.

Beijing resident Sean Li told Reuters a planned lockdown for his resort was canceled on Friday after residents spotted workers putting up barriers on their gates.

The residents protested to their local chief and convinced him to cancel the plans.

Mr Li said: “The fire in Urumqi has shocked everyone in the country.

“This tragedy could have happened to any of us.”

Read more:
Who are the Uyghurs and why are they oppressed by China?

Urumqi saw protests on Friday night when a vigil for fire victims turned into an anti-lockdown protest.

People chanted “open up, open up” in videos that were shared on social media before being deleted by censors on Saturday.

But protesters won some concessions, with parts of the city deemed low-risk being somewhat freer from restrictions over the weekend.

Protests against government policy are rare in China but even more unusual in Xinjiang.

Xinjiang, home to China’s persecuted Uighur minority, has seen some of the longest lockdown restrictions in the country, with reports of people starving earlier in the year. 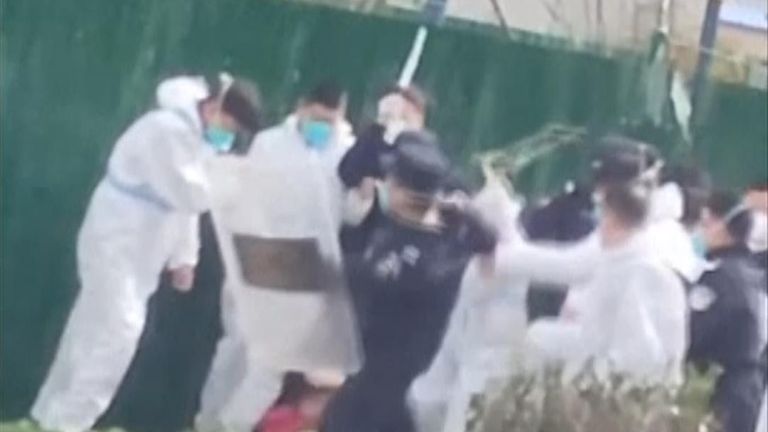 China’s zero COVID policy was initially welcomed by citizens, who saw it as a reduction in deaths while other countries faced huge losses.

But support has plummeted in recent months as Chinese people tire of restrictions that go far beyond what has been seen during the UK’s lockdown, for example.

China is the only major country still battling the COVID-19 pandemic with mass testing and strict lockdowns.