Explosions were heard in Kyiv and air raid sirens howled across the country just after midnight, forcing Ukrainians to abandon New Year celebrations and head for bomb shelters.

The last apparent Russian salvo followed Explosions on New Year’s Eve in several regions of Ukrainewith one person killed and 20 injured in the capital alone.

As the sirens sounded in Kyiv in the first minutes of 2023, some people on their balconies shouted “Glory to Ukraine. Glory to the heroes”.

The city’s mayor, Vitali Klitschko, said explosions were heard and the air defense was working.

He shared a photo on Telegram apparently showing where a rocket fragment had hit a car in the Shevchenkivskyi district of Kyiv. 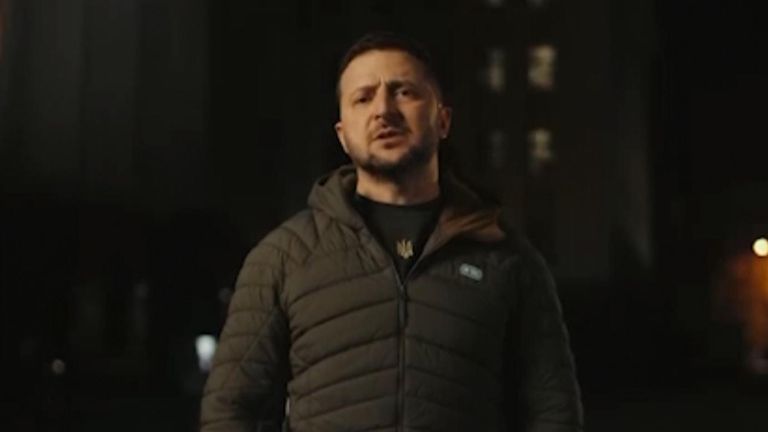 Zelenskyy calls for victory in 2023 in New Year’s message

The air raid sirens sounded minutes after the end of Volodymyr Zelenskyy’s New Year’s speech in which he praised those who had fought for their country since the February 24 invasion.

He told the citizens: “I want to wish us all one thing: victory.

“And that’s the main thing. A wish for all Ukrainians.”

“The return to normal life. To happy times without curfew. To earthly joys without aerial alerts. The return of what was stolen from us. The childhood of our children, the peaceful old age of our parents.

“May the new year bring all of this. We are ready to fight for this. This is why each of us is here. I am here. We are here. You are here. Everyone is here. We are all here. ‘Ukraine.

There were reports on social media of people being moved to tears by the speech.

In his own speech, Vladimir Putin said 2022 was a year of “difficult but necessary decisions” and “important steps towards full Russian sovereignty and a powerful consolidation of our society”.

The Russian president also denounced the West, echoing previous claims that he was encouraging neo-Nazis in Ukraine.

Read more:
Putin ‘hides behind you and burns your country’, Zelensky tells Russians
‘Strong possibility’ that Ukraine will take over all territory by the end of 2023 – except for Crimea

He said: “For years, Western elites have hypocritically assured us of their peaceful intentions, including the resolution of the most difficult conflict in Donbass.

“In fact, they in every way encouraged the neo-Nazis, who continued to carry out military and openly terrorist actions against the civilians of the people’s republics of Donbass.

“The West lied about peace, but was preparing for aggression, and today it openly admits it, more embarrassed. And they are cynically using Ukraine and its people to weaken and divide Russia.

“We never allowed anyone to do this and we won’t allow it now.”