Rishi Sunak must recall parliament “immediately” so MPs can discuss the “NHS crisis”, a leading medical organization has said.

Writing a letter to the P.M On Wednesday, Doctors’ Association UK (DAUK) – an organization led by frontline medical staff – and its supporters said MPs must return from their festive break before Monday 9 January.

It stated: “The nhs is broken. Patients are dying and staff are suffering moral injury from the appalling conditions.

“We are desperately in need of meaningful action from our leaders and this cannot wait.

“We therefore call on the government to immediately recall members of parliament from their Christmas recess to the House of Commons to hold an emergency debate on the state of the NHS.

“All parties must put election-based strategy aside and focus on the immediate actions that can be taken to save lives.”

In the letter, DAUK said “up to 500 people are dying each week because of delays in emergency care” and warned the PM that NHS staff are reporting “the worst conditions they have seen within the service”.

The correspondence continued: “Contrary to reports from number 10, the NHS does NOT have enough money. People are dying because of an abject refusal to invest the sums needed to pay staff and provide social care.

“The result of inaction and ignoring our voices, will be more preventable death and haemorrhaging of hard-working, experienced healthcare staff.

“Prime minister, we implore you to act TODAY, without delay.”

The letter was published just hours before Mr Sunak gave his first speech of 2023 and addressed the “challenges” in the health service, especially around A&E, saying people were “understandably anxious” after seeing long queues of ambulances outside hospitals across the festive period.

He said the government was taking “urgent action” to increase bed capacity and to get more people out of hospital and into social care to help tackle demand.

The PM also acknowledged people were “waiting too long for the care that they need” due to massive waiting list backlogs, and promised it was “an absolute priority” for him to tackle.

But in response, head of the Royal College of Nursing Pat Cullen, said he “appeared detached from the reality of what is happening and why” in the NHS.

Writing to health secretary Steve Barclay, the union chief claimed the speech “focused on false promise and hollow boasts when practical and urgent measures are required on the part of government”.

Earlier today, shadow health minister and doctor Rosena Allin-Khan said NHS staff are going to work feeling as if they have “one arm tied” amid growing pressures in the healthcare service

Ms Allin-Khan, who worked in the nhs over Christmas and will be completing a shift this Sunday, told Sky News current pressures mean “we have a situation where people are having intimate examinations in cupboards”. 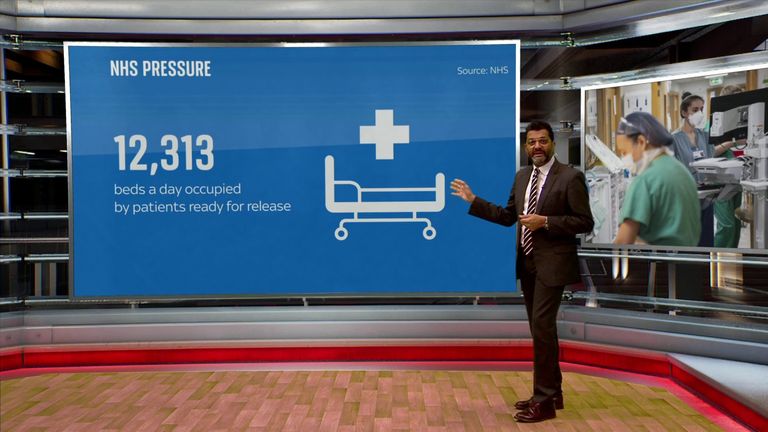 Asked what it comes down to, she said: “We have had 12 years of political choices that have resulted in us already having an under-resourced NHS with no slack in the system.

“Now we have a situation where people are having intimate examinations in cupboards, patients are waiting up to 99 hours in an ambulance in an A&E bay, unable to get a bed inside a hospital.

“We’re having children sleeping on plastic chairs, patients lying on the floors, being examined on floors with sheets held up by nurses.”

Ms Allin-Khan said the state of the NHS is an “acute crisis” and described doctors and nurses as being “absolutely broken”.

The shadow health minister said Labor has a “workforce plan” to deal with the issues, adding: “We would train an extra 10,000 nurses and midwives every year, we would double the number of medical school places, we would have 5,000 extra health visitors , we would improve our mental health services.”

Concerns are mounting about the current state of public healthcare, with well over a dozen NHS trusts and ambulance services having declared critical incidents over the festive period.

Yesterday, Downing Street said the government is doing “everything possible” to increase the number of hospital beds available as winter pressures continue to bite.

But the British Medical Association (BMA) has accused the government’s “political choices” of leading to patients “dying unnecessarily”.

Issuing a stark warning earlier this week, Professor Phil Banfield, chairman of the BMA council, said: “The current situation in the NHS is intolerable and unsustainable, both for our patients and the hard-working staff desperately trying to keep up with incredibly high levels of demand.”

But the PM’s official spokesman said on Tuesday that ministers had been “up front” with the public about the pressures the NHS would face this winterpartly due to the backlog created by the pandemic.

He also acknowledged that the current pressure on the health service was an “unprecedented challenge”.

Opposition parties have criticized the government for inaction over recent days, with the Liberal Democrats calling for parliament to be recalled to discuss the situation.

Speaking for the first time since the festive period yesterday, the health secretary blamed high cases of flu, COVID and fears about Strep A for the “massive pressure” the NHS has faced in recent weeks.

Asked if the situation was acceptable, Steve Barclay said “no”, adding that he had held meetings on Tuesday and over Christmas with NHS England to go through their operational plans, with a particular focus on tackling “delayed discharges” – those people in hospital beds who are fit enough to go home.