Sir Keir Starmer has promised to repeal any new anti-strike laws introduced by Rishi Sunak if the Labor Party were to win the next general election.

Sky News understands the PM is set to announce legislation to enforce “minimum service levels” in certain sectors in the coming days.

The laws will require a proportion of union members to continue working to retain a “minimum level” of service and strikes could be deemed illegal if unions refuse to provide this.

The six sectors involved are believed to be: the health service, railways, education, fire services, border security and nuclear energy.

Delivering his first big speech of the year in Stratford, the Labor leader said: “I don’t think this legislation is going to work and I’m pretty sure they’ve had an assessment that tells them that. It’s likely to make a bad situation worse.”

Sir Keir said his party would look at what proposals the government brings forward, adding: “But if it’s further restrictions, then we will repeal it.

“And the reason for that is I do not think that legislation is the way that you bring an end to industrial disputes. You have to get in the room and compromise.

“You can’t legislate your way out of 30 years, 13 years of failure.

“So, you know, as I say, the government’s all over the show.

Do we need laws to stop strikes?

Earlier today, a rail union leader warned that the new anti-strike laws could lead to “longer strife and a different form of action”.

Aslef boss Mick Whelan told Sky News “there will be a knock on effect” from any new rules which are put in place by the ministers around striking.

“We’re currently – with 11 other trade unions – taking legal action against the last set of laws they put in place, and we would look at doing that in future as well,” Mr Whelan warned.

“And I think if the government gets away with what it’s doing, we’ll be left with an inherently unsafe railway system.”

Read more:
Find out which areas area affected by the fresh strikes
Union urges Rishi Sunak to ‘step up to the plate’

Mr Whelan said minimum strike levels that have been introduced in European countries were “unworkable”, adding that it would be “difficult to see” how people who “legitimately, legally” can be on strike can be stopped from taking industrial action.

“But we’ll look at the detail of those laws if we have to comply with them, we will,” Mr Whelan added. 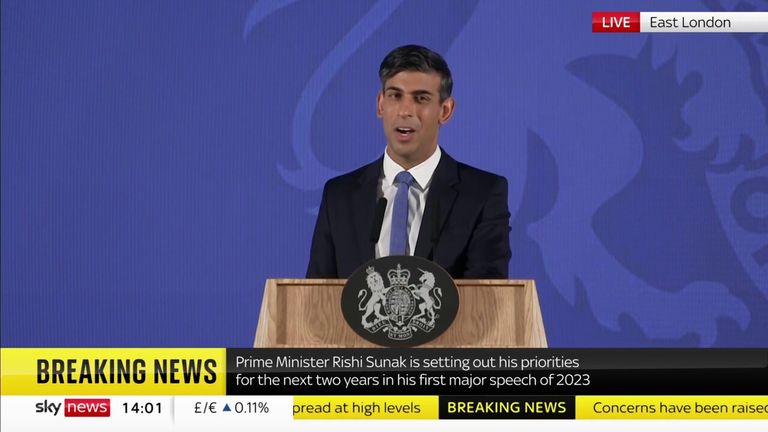 Yesterday, the prime minister insisted that his door is always openadding: “You’ll hear more from the government in the coming days about our approach.”

And while Mr Sunak said people should have the right to strike, he warned: “That has to be balanced with the right of the British public to go about their lives without suffering undue disruption in the way we’ve seen recently.”

it comes as more rail strikes take place across the UK today as drivers begin a new walkout – meaning some areas will have no trains at all.

Although 48 hours of industrial action by the RMT union has now come to an end, members of the Aslef union are now striking as part of a long-running dispute over pay.

Drivers at 15 rail companies are involved and it is estimated that just 20% of normal services will run. 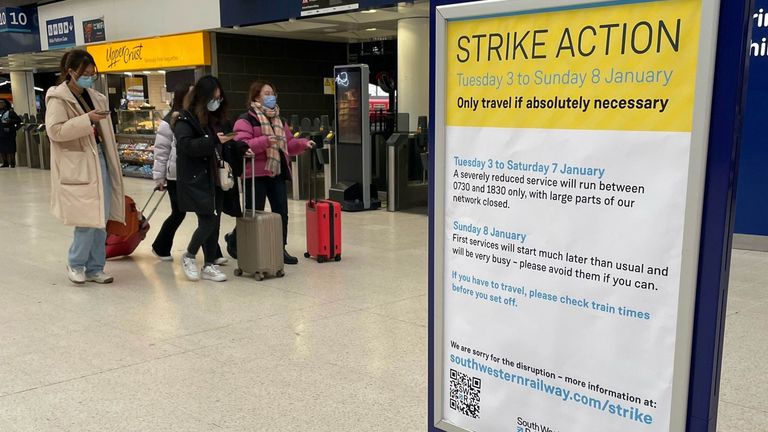 Further strikes are looming, with the RMT set to stage another 48-hour strike on Friday and Saturday.

But Steve Montgomery, chair of the Rail Delivery Group, which represents train companies, told Sky News “we’re closer than we’ve been in a long time” to a deal with the RMT.