Scotland’s gender recognition bill has caused constitutional friction with Westminster – but the content of the bill is also causing consternation.

The Gender Recognition Reform (Scotland) Bill was passed by the Scottish parliament in December but in January, the government in Westminster announced it was blocking the bill from Royal Assent, the final stage of any new bill.

It is the first time Westminster has used the power since devolution nearly 25 years ago.

The bill means the age someone can legally change their gender in scotland would be lowered to 16 from 18, there would no longer be a need for a medical diagnosis of gender dysphoria and someone would only have to live in their acquired gender for three months – reduced from two years.

Westminster is objecting to the bill on the grounds that it would have a “significant impact” on equalities matters in Scotland, England and Wales.

Ministers have insisted it is not the content of the bill they have an issue with, as they are “very supportive” of helping people transition, but how it will divide Scotland from the rest of the UK, claiming it goes against the Equality Act – which is ruled by Westminster not devolved nations.

But First Minister Nicola Sturgeon has said the government’s move to block the bill is an affront to democracy.

While the government has said it is the differences the bill will cause between Scotland and the rest of the UK, the contents of the bill have been behind all their arguments before this.

What are the concerns about the bill’s contents?

Ministers fear the changes put forward by Scotland may lead to gender tourism, where people could get a Gender Recognition Certificate (GRC) in Scotland then demand the same rights in England or Wales.

There is also a worry that people who change gender in Scotland would have a different legal gender when they are in the rest of the UK.

Under the legislation, anyone born in Scotland or who lives there would be able to apply for a Scottish GRC.

A copy is then emailed to the relevant office, the National Records of Scotland, which then issues a new birth certificate showing the person’s new gender, without revealing they have changed gender.

Critics have raised concerns predatory men could obtain a GRC in Scotland in order to gain access to single-sex spaces and place women in jeopardy, and those spaces would have to adopt different policies.

The UN’s special rapporteur on violence against women and girls said the reforms could allow violent males to “abuse” the system.

Author and women’s rights campaigner JK Rowling, said: “All a man needs to become a woman is to say he’s one.”

The Equality and Human Rights Commission warned there could be an impact on sex discrimination laws across the UK, including equal pay and entitlements to benefits and pensions.

When Scotland passed the bill in December, Scotland Secretary Alister Jack said: “We share the concerns that many people have regarding certain aspects of this bill, and in particular the safety issues for women and children.” 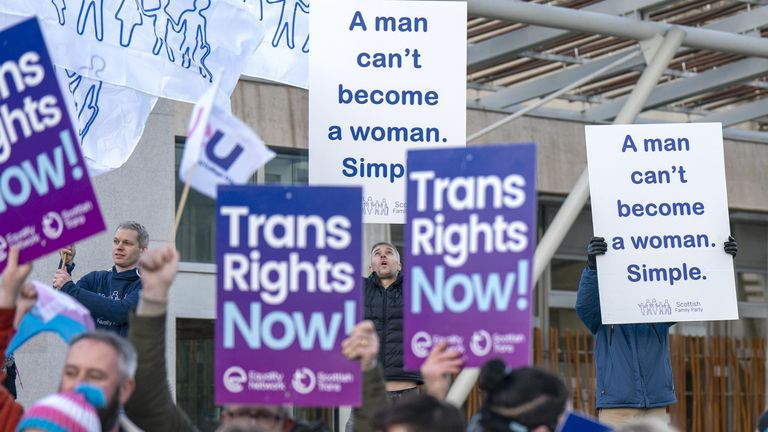 
What have those in support of the bill been saying?

In Scotland, MSPs debated for two long days and the SNP experienced its biggest backbench rebellion before the bill was eventually passed by 86 votes to 39.

Those in favor of the bill argued it would introduce a “simpler and fairer way for trans men and women to be legally recognized as who they truly are, allowing them to live with the dignity we all deserve”.

Ms Sturgeon argued there was a need to remove an intrusive medical diagnosis and streamline the process for obtaining a GRC.

She also said the bill would not change women’s protections under the Equality Act, agreeing to an amendment meaning anyone subject to a sexual harm prevention order or sexual offenses prevention order will not be allowed to obtain a GRC.

The first minister also said the bill would not give predatory men more access to women.

The bill, the charity said, aligns Scotland with “leading international practice endorsed by the United Nations and adopted by 30 countries, including Canada, Australia, New Zealand, Ireland and most of the United States of America.”

It also denied the bill clashes with the Equality Act and accused the government of allowing trans people’s lives to be used as a political football.