He might be the under-cat in the leadership race, but the campaign to make No 10’s famous tabby the next prime minister is well and truly under way.

Billboards have emerged across London announcing that Larry the cat, the chief mouser to the Cabinet Office and the UK’s top A-list purrlitical celebrity, has thrown his collar into the ring to become the country’s next leader.

The beloved Downing Street pet has remained the one constant within an ever-changing government since he was taken in by former prime minister David Cameron in 2011.

And while Liz Truss looks set to beat Rishi Sunak when the results of the leadership contest are announced tomorrow – it’s Larry who is feeling the love on social media.

The sign features the cat in a Union flag tie alongside the slogan, “Larry for leader”.

The image was shared with the caption: “Dreams can come true #Larry4Leader #YesWeCat.”

Billboards like this have popped up in Hackney, Peckham and on Shepherd’s Bush roundabout.

“(Obviously) would vote Larry for leader (out of) the three,” 32-year-old Rebecca Rose said, sharing a photo of Larry next to candidates Mr Sunak and Ms Truss.

Ms Rose later tweeted about being handed a #Larry4Leader leaflet and wrote: “Now been handed this en route to work.”

Others posted pictures of their own cats in response to Larry as a show of support.

“We need clarity on all of your ‘paw’licies,” one wrote.

The team in charge of the campaign, Don’t Panic, partnered with Build Hollywood to organize the billboards. 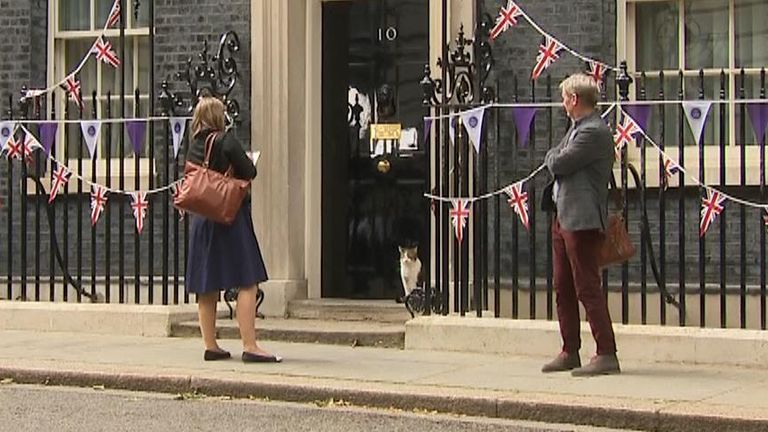 They specified what Larry stands for in his “Meow-festo”, including “responsible hiss-cal policy” and “no lying in No 10 unless it’s on a comfy cushion”.

The agency tweeted: “As the only permanent resident of 10 Downing Street, @Number10cat is throwing his collar into the ring to give Britain a proper choice. #Larry4Leader represents the millions who don’t get a say in the choice of the next PM .”

Larry was only four years old when he was adopted from Battersea Dogs and Cats Home to begin his new life in politics.

He has served as a trusted companion to three prime ministers: David Cameron, Theresa May and the outgoing PM, Boris Johnson.

But in real life he is much more friendly and has made regular appearances outside Downing Street when the cameras are rolling over his 10-year reign.

Who will be the next PM? Watch and follow live from 12.30pm on Monday as Boris Johnson’s successor is announced