Rows of crosses lined the forest, enveloped in the unmistakable smell of death.

Each makeshift wooden marker protruded from a mound of dirt where a body was buried.

Some displayed the names of the deceased, but the majority only bore numbers because the identity was unknown.

“There is a smell of death in the air”

Police investigators and forensic experts have begun the difficult process of exhuming the remains at this location mass burial site on the edge of the newly liberated town of Izyum.

They said it contained more than 440 men, women and children, all civilians, as well as a mass grave which housed at least 17 Ukrainian soldiers.

The discovery was only possible after Ukrainian forces pushed Russian troops out of Izyum last week, allowing police to move there.

Dressed in light blue plastic jumpsuits and armed with shovels, a team was tasked with digging up the dead.

They took turns working on one of the rows of shallow graves, carefully removing the sandy soil so that each body could be recovered.

The dead seemed to have been thrown without even the dignity of a coffin. 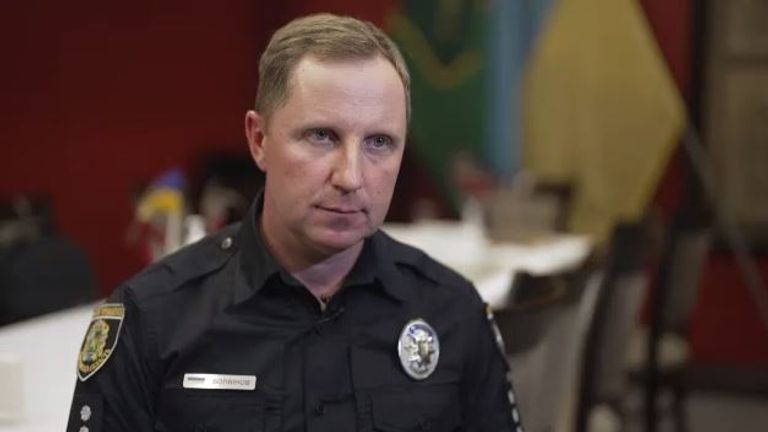 The cause of each death will take time to document, but officials said they believe some of the victims were killed in Russian artillery and airstrikes during the past seven months of the war.

They said others had been shot.

There is also a hint of torture.

A senior prosecutor said the first body found had a rope around its neck and showed signs of “violent death”.

“I worked in the prosecutor’s office for 20 years, and this is the first time in my life that I see something like this,” said Oleksandr Filchakov, as he visited the crime scene in the woods, located next to a real cemetery.

Read more:
Russia will do everything in its power to end the war in Ukraine ‘as soon as possible’, Putin says
Russian prisoners told they could be freed if they serve six months in Ukraine – leaked video appears to show this

Several bodies could be seen, either being retrieved from the ground or lying in body bags.

When a victim’s identity was not known, it was recorded in a book along with any specific details about the person, such as gender, he said.

Investigators now have the record book, which details everyone buried at the site. 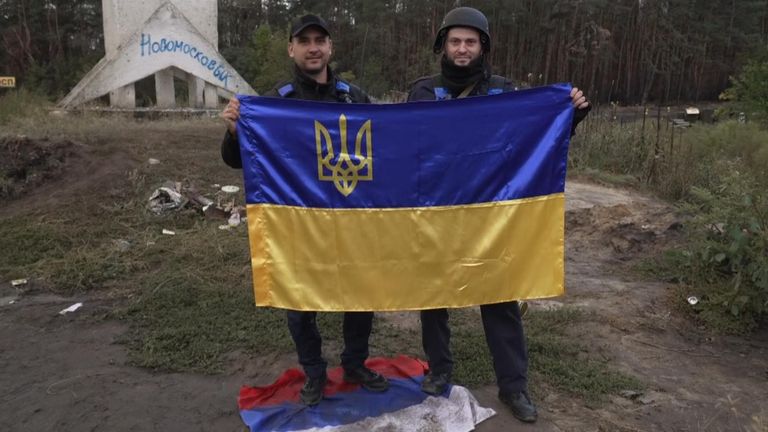 The city of Izyum is liberated but at a price


The chief investigator said the total number was now estimated at 445.

Additionally, at least 17 Ukrainian soldiers were buried in a single mass grave also at the site, according to police.

“It is very painful for us… This place only appeared because of the (Russian) attacker… I am at a loss for words.”

They will be taken for an autopsy to establish the cause of death.

DNA samples will also be taken to allow investigators to verify identities and determine who is in the unmarked graves – a huge task.

The chief prosecutor said the work would be done as quickly as possible, but stressed that it was a process that could not be rushed due to the need for thoroughness and forensics.

When asked if international prosecutors were also involved given the scale of the challenge, he replied: “Of course our international partners are helping us.

“They are involved in our groups. They now work in Izyum.”

The burial site was also a Russian military position, with holes dug in the ground to hold tanks and other weapons. There also appeared to be a fortified trench for the troops.

Across the road from the site was a row of houses.

A resident who lived through the occupation said local people were barred from entering the forested area.

Serhii Cherniak, 61, said that changed when Russian tanks and artillery retreated – although still during the occupation.

He said he ventured out to collect wood and saw the mass grave of Ukrainian soldiers.

He was damning of the local gravediggers.

“They didn’t even cover them (the bodies of the Ukrainian soldiers) with bags,” he said.

“They were just thrown like they were dogs. It’s not even a grave, it was a ditch the Russians had used to park one of their vehicles. They got in, threw them and have sprinkled (the sand).”