Day one: New Prime Minister Liz Truss to see Queen in Scotland and unveil energy price freeze that could last until 2024 | PoliticsNews


Liz Truss is making a frantic 1,000-mile dash to see the Queen before launching her premiership with a £100bn energy price freeze that could last until the next election.

She is flying 500 miles each way to Balmoral to be handed the keys to No 10 by the monarch before addressing the nation from Downing Street with a pledge to slash household bills.

First up, we’ll be hearing from outgoing prime minister Boris Johnson at around 7.30am as he gives his farewell address outside Downing Street.

He and Ms Truss will then both fly to Aberdeen on separate plans for their meetings with the monarch.

Mr Johnson will get there first at 11.20am and will formally hand in his resignation to the Queen.

Once he has left, his successor will be invited in for her first private audience with the monarch. She will get to Balmoral for around 12.10pm, when she will be Britain appointed’s next prime minister and asked to form an administration.

After her half an hour with the Queen, Ms Truss is expected to fly back to London.

There she’ll give her first address as prime minister at about 4pm.

She will be greeted by the cabinet secretary at the door of Number 10 and will be clapped in by staff before heading into the Cabinet Room to receive security and intelligence briefings from civil servants.

The nuclear codes will be handed over to her and she will write “letters of last resort” to commanders of submarines carrying Trident nuclear missiles with orders on what to do if the government has been wiped out in a nuclear attack.

Her emergency package to tackle the cost of living crisis is expected to include freezing energy bills for homes and businesses until January next year at least – and possibly until 2024.

It would mean that for a typical household, energy bills would be frozen at just under £2,000. The initial cost to taxpayers would be £40bn – to be paid for by more government borrowing.

Over the past 24 hours, Truss allies have been locked in talks with energy bosses, thrashing out details of the price freeze, which if it lasts two years could eventually cost £100bn.

Government ministers are expected to claim the new PM’s plan is more generous than the price freeze proposed by Labour, but she is expected to reject their demand for a windfall tax.

Backbench Boris: What will outgoing PM do now?

Who will be in the cabinet?

The big cabinet jobs have long been settled and will be filled by Ms Truss’s closest allies, including Kwasi Kwarteng as chancellor, James Cleverly as foreign secretary and Therese Coffey tipped for health secretary.

After Priti Patel quit as home secretary, she is expected to be replaced by Suella Braverman. Culture secretary and Boris Johnson cheerleader Nadine Dorries is expected to follow Ms Patel in resigning.

But on policy issues, dealing with the cost of living crisis is the new prime minister’s most urgent priority. In her speech de ella after she was declared a Tory leader, she vowed to deal with people’s energy bills.

But under the new PM’s price freeze plan, the government would directly intervene in the wholesale energy market, subsidizing the cost of gas bought by electricity generators and suppliers.

That would mean taxpayers taking on the risk of the surging wholesale gas prices while subsidizing the cost of energy for hard-pressed households and businesses currently fearing bankruptcy. 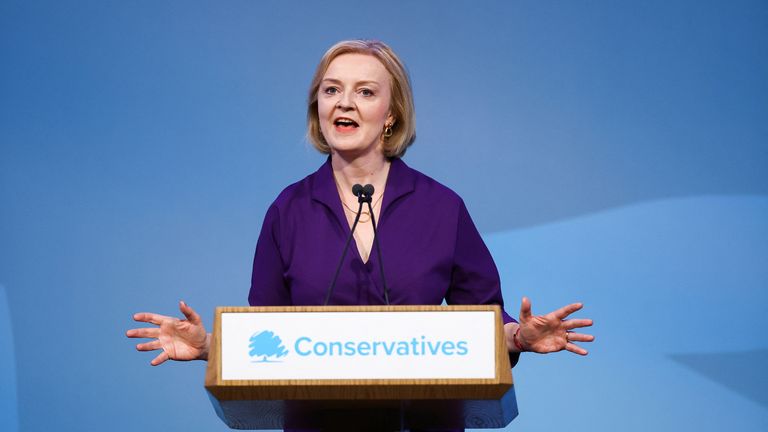 What will be in the new PM’s in-tray?

Plan to be outlined as early as Thursday

After the new prime minister’s pledge of help on the steps of No 10, full details are expected from either Ms Truss or her new chancellor Mr Kwarteng as early as this Thursday.

Her Downing Street address on return from Balmoral will also include pledges on tax cuts and moves to tackle the crisis facing the NHS. Allies are describing their strategy as a “shock and awe” approach.

Besides her policy initiatives, the new PM faces the task of uniting her bitterly divided party. After her 57%-43% victory over Rishi Sunak, many Tory MPs are urging her to heal the wounds of the leadership contest.

Sunak supporter and former cabinet minister Theresa Villiers told Sky News she would now support Ms Truss’s policies, such as the cut to National Insurance that was bitterly attacked by the former chancellor.

But Ms Villiers warned: “It will be really important to ensure that whatever decisions are made on tax don’t impact on inflation or add excessively to borrowing.”

On energy bills, she said: “There is a case for some more broadly based support as well, targeting it towards those on low incomes.”

John Penrose, who resigned from his government job over Mr Johnson’s partygate conduct, said Ms Truss had a “clear win”, but added: “We’ll have to wait and see if she can deliver, but she said the right things.”

And on energy bills, 1922 Committee treasurer Sir Geoffrey Clifton-Brown told Sky News: “I wouldn’t give a very big package to everybody, because that’s simply racking up our already huge debt and is going to have to be paid back some time .”