This week will be remembered as one of the most significant in our nation’s history.

Never before has a country lost a monarch and ushered in a new prime minister in such a short space of time.

It was only on Tuesday that Queen Elizabeth II asked Liz Truss to form a government.

By Thursday afternoon, an hour or so before the rest of the nation learned the news, Ms Truss had phoned the King to offer her condolences on the death of his mother.

This afternoon, they held their first-audience together at Buckingham Palace.

If ever there were a series of shared moments and experiences upon which a unique relationship could be built between a King and his prime minister, surely these last few days have provided it.

Tears, cheers, and a kiss for the King – live updates

But this is a relationship between institutions, not just individuals – and the public expectations for both Liz Truss and King Charles III to deliver in their new roles are enormous.

The loss of a head of state after seven decades in power was always going to be a moment of profound grief and rupture for the United Kingdom. For millions of us, the second Elizabethan era is all we have ever known.

That it draws to a close in the same week a new prime minister was anointed – picked by the Conservative Party, not the public – makes the Queen’s loss even more unsettling.

The backdrop to this great change is a country already at sea – with huge anxiety over energy bills, the prospect of a protracted recession and a war on the edge of Europe.

For Queen Elizabeth was, as Prime Minister Truss put it as she addressed the nation soon after news of the monarch’s death, the “rock on which modern Britain was built.” It presents the new prime minister with a challenge and an opportunity.

For if Liz Truss can rise to the occasion and carry the grief of the nation and become its comforter, she has the opportunity to cement herself into the minds of the public.

The momentousness of that task would weigh on any prime minister, particularly one who has been in office but 72 hours.

And so it was for Ms Truss as she emerged from Downing Street on Thursday night to address the nation on the news of the monarch’s death. There was an audible deep breath and pause as she steeled herself to deliver the address – which she did flawlessly.

Readmore:
The King: Will Charles bring a different type of reign?
King Charles in pictures – life of royal as he becomes Britain’s monarch
Britain’s new King: From school bullies to Diana tragedy – the events that shaped Charles

But for a politician, who has admitted that she is “not the slickest presenter” or greatest orator, it must be a daunting task.

“On the other hand, the nation at this time wants to be brought together and feel a sense of unity, and feel almost a sense of obligation to the Queen to be united, and I think the task of any leader in those circumstances is that you articulate the sense of loss and the sense of determination as a sense of hope and you express what the Queen meant to us.

“I think that’s what leaders across the political spectrum have done in these last days with a great deal of sincerity.”

Ms Truss had planned to use these first days in office to try to impress herself upon the public with big bang action on energy bills, a mini-Budget to try to tackle the cost of living crisis and address wider economic malaise. 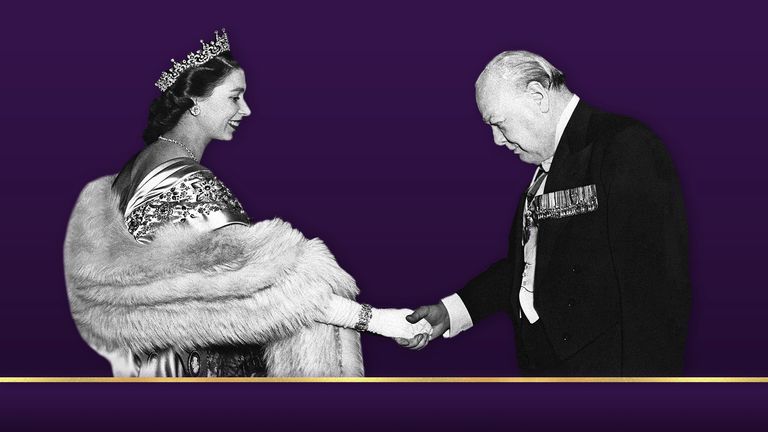 The Queen and her prime ministers

There was to be a trip to the Ukraine and then the US. This was to be a PM in action. Instead, she is a PM who must find the right words to comfort a grieving nation when she herself would admit that her strength is not her.

There will inevitably be a comparison with Tony Blair, who captured the nation’s mood after the death of Princess Diana in August 1997 when he described her as the “People’s Princess”. He was a prime minister who managed to connect to the nation when the Royal Family seemed to fall short.

Speaking of that moment, Mr Blair told me: “You’re aware of the responsibility, but the best thing to say is what you feel. If you say what you’re feeling you probably feel the same as most people.”

“Queen Elizabeth was our monarch but she was in a sense our matriarch, the mother of our nation,” said Mr Blair.

But even as the nation grieves, he thinks that the country will be willing the new King and prime minister on – and that if these leaders hit the right tone, the end of the Elizabethan era need not be a moment of fracture but rather one of unity and nation building.

“I think the passing of the Queen is of course unsettling because she has been such a rock of stability. There will be a tremendous sense of genuine mourning and this is really important… if you think of all the things that divide us, this unites us,” he added.