Prime Minister Liz Truss will hold her first cabinet with her newly assembled top team this morning – before going head-to-head with Sir Keir Starmer at PMQs.

On Tuesday, in her first speech as prime minister, Ms Truss said the UK would “ride out the storm” caused by the war in Ukraine and promised a package of reforms to “transform Britain” including measures to boost growth and put the NHS on a “firm footing”.

She also pledged to tackle soaring energy bills as an immediate priority. She is expected to announce a plan to freeze bills later in the week.

It has been reported that annual bills will be frozen at around £2,500 – more than £500 above the current price cap but £1,000 less than the limit due to be imposed in October.

His party has called for the energy price cap to be frozen now, which would be paid for by introducing a new windfall tax on oil and gas companies’ profits without a “major tax loophole” it claims the government’s current windfall tax has.

After giving her speech outside Number 10, Ms Truss appointed her cabinet team who will gather for their first meeting this morning.

Loyal allies of Ms Truss were rewarded for their long-term support, including friend Therese Coffey who was promoted from work and pensions secretary to health secretary and deputy prime minister.

Big promises from the new PM

Elsewhere, former business secretary Kwasi Kwarteng was elevated to chancellor – and Sky News understands in the first few hours of the job he summoned the bosses of Britain’s biggest banks for talks today.

Posting on social media, Mr Kwarteng said being offered the position was “the honor of a lifetime”.

Readmore: Who is Kwasi Kwarteng?

Mr Cleverly had worked as a minister in the Foreign Office for two years, acting effectively as Ms Truss’s deputy.

Former chancellor of the Duchy of Lancaster and policing minister Kit Malthouse was given the education brief, while former international trade secretary Anne-Marie Trevelyan will deal with the autumn of planned railway strikes in her new role as transport secretary. 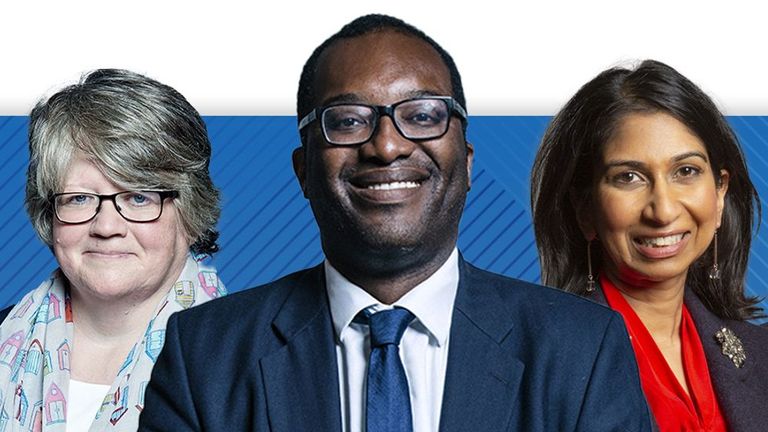 The PM’s press secretary said Ms Truss had appointed a cabinet “which represents the depth and breadth of talent in the Conservative Party” and which will “unify the party, get our economy growing and deliver for the British people”.

More junior ministers are expected to be appointed today.

Readmore: The conundrum facing Liz Truss could trigger ‘existential threat’ to Tories
Truss needs to put gaffe-prone days behind her if she wants international respect

Shortly after making her first address outside Downing Street, the new PM made her first call – as promised – to Ukrainian President Volodymyr Zelenskyy.

In a statement after they had spoken, Ms Truss said: “Ukraine can depend on the UK for support in the long term.”

Meanwhile, in a post on social media, President Zelenskyy said he thanked Ms Truss for the UK’s continued support for Ukraine and invited her to visit the country.

President Biden offered his congratulations, saying he looked forward to “deepening the special relationship between our countries and working in close cooperation on global challenges, including continued support for Ukraine as it defends itself against Russian aggression.”

Ms Truss said she and Mr Biden discussed working together on shared challenges such as the economic impact of the war in Ukraine and promised to build on “UK-US links”.