MPs will look at returning to the Commons a week early from their party conferences after losing sitting time over the mourning period for the Queen.

Proceedings in both the House of Commons and House of Lords were halted last Thursday after the news of the monarch’s death.

While they are due to resume next Wednesday – two days after the Queen’s funeral – both houses are due to pause once more from 22 September to allow for the Labour, Conservative and SNP conferences to take place. They are then not expected to return until Monday 17 October.

The pause in proceedings came at an unusual time as the country saw a newly-appointed Liz Truss take over amidst pressure to act on the cost of living crisis.

Speaker of the House of Commons, Sir Lindsay Hoyle, said on Thursday it was his “hope” and “expectation” that the upcoming recess period would be cut short – though he does not want to “hold anybody to ransom.”

Now an order paper has been published on the Commons’ website, saying a motion will be proposed to the House on Thursday that MPs should come back from the conference recess on Tuesday 11 October – almost a week early.

News of the Queen’s ailing health broke in Parliament as Ms Truss was outlining her plan to tackle rising energy bills.

She announced she would introduce an energy price guarantee (EPG) to restrict bills to £2,500 for two years from October – about £500 higher than now, but £1,000 less than Ofgem’s incoming price cap rise.

The new PM also promised Chancellor Kwasi Kwarteng would hold a “tax event” in the Commons to set out his mini-budget to further help households and businesses to ease the burden.

Sky News understands this is now expected to happen on Friday 23 September – though the date has not been officially confirmed.

Silence in Commons and emotional Speaker

According to the order paper, MPs will return on Wednesday to begin swearing allegiance to King Charles.

Official business will then ramp up on Thursday, with the opportunity for urgent questions and statements, as well as a general debate on the situation in Ukraine.

“The House will also consider a range of procedural motions relating to the forthcoming recess, sittings of the House, primary legislation and Westminster Hall,” says the order paper.

“This will include a motion proposing that the House return from the conference recess on Tuesday 11 October.” 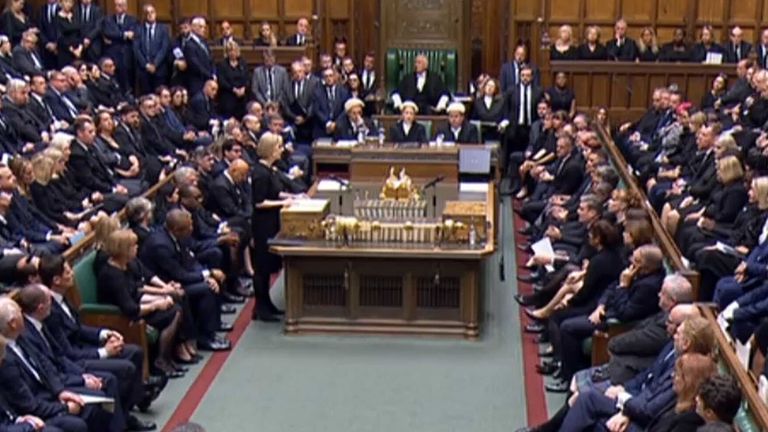 Speaking to Times Radio ahead of the publication, the Commons speaker said he would “certainly expect” a debate on the energy crisis before the party conferences.

“I do believe that they could well be cut short – and I don’t want to hold anybody to ransom by saying I may have misled people – but that will be my personal expectation… and hope, may I add,” he said.

The PM’s official spokesman said on Wednesday: “We are looking at changing the recess dates.”