Rishi Sunak: The prime ministerial hopeful who went from favorite to underdog | PoliticsNews


When Rishi Sunak resigned as chancellor – minutes after Health Secretary Sajid Javid left his role – it prompted a raft of senior figures to follow him out the door in protest over Boris Johnson’s leadership.

But while some praised him for doing the “honorable thing” by stabbing Mr Johnson “in the front” and many MPs rallied behind him, the move seemed to damage his reputation among the wider party membership whose votes will decide the outcome of the Tory leadership contest.

Foreign Secretary Liz Truss has stormed ahead in the race according to the polls, winning over the Tory faithful with her Johnson loyalism and promises of tax cuts.

But the race isn’t over just yet, so let’s take a look at what brought Mr Sunak to this point and how he has tried to win the keys to Number 10.

Sunak, now 42, was born in Southampton as the eldest of three siblings to his father, who was a GP, and his mother, a pharmacist.

However, it was a long journey for his family to make it to the Hampshire city, as his grandparents were born in the northern Indian state of Punjab and emigrated to Britain via East Africa in the 1960s.

He was sent to England’s oldest public school, Winchester College, where he became the first Indian-origin head boy and was editor of the school paper.

He has since said his experience at the historic boarding school was “intellectually transforming” and put him “on a different trajectory.”

Sunak went on to study philosophy, politics and economics at Lincoln College at the University of Oxford, where he obtained a first-class degree.

After completing an MBA at Stanford University, where he met his future wife, Akshata Murthy, Mr Sunak went on to work for investment bank Goldman Sachs as an analyst.

But he was said to have already had job offers from investment banks under his belt while still in his second year at Oxford.

He moved to work for hedge funds in 2006 when he joined TCI, known as a very aggressive fund, and left three years later to co-found a new hedge fund.

Then it was time for politics.

In 2014, Sunak was selected as the Conservative Party candidate in the Yorkshire seat of Richmond – previously held by former Tory leader William Hague – ahead of the following year’s general election.

Nicknamed the “maharajah of the Yorkshire Dales”, he recalled being introduced as “the new William Hague” to his constituents after winning the ballot, to which a Yorkshire farmer replied: “Ah yes Haguey!

“Good bloke. I like him. Bit pale, though. This one’s got a nice tan.”

Soon after his entry into the Commons – where as a Hindu, he took his oath on the Bhagavad Gita – the first big political fight of his career came along in Brexit.

Sunak supported leaving the EU, claiming the UK would be “freer, fairer and more prosperous” outside of the bloc.

His side won, and he bided his time on the backbenches, supporting Theresa May’s negotiations and writing papers on the benefits of freeports, before being appointed to government in January 2018 as a junior minister at the Ministry for Housing, Communities and Local Government.

After Mrs May’s demise, he joined with colleagues Oliver Dowden and Robert Jenrick to write an article in the Telegraph, backing Boris Johnson as the only person who could “save” the Tory Party.

His support paid off, as when Mr Johnson became PM in July 2019, Sunak secured a promotion to become chief secretary to the Treasury, becoming the righthand man to Mr Javid as chancellor.

However, it was the exit of that boss which led to his real rise to prominence, being made chancellor in February 2020 – a month before COVID took hold.

From relative unknown to household name

Sunak won praise throughout the pandemic for rapidly introducing support schemes worth billions of pounds to keep jobs and businesses afloat during 18 months of lockdowns.

The likes of furlough and “Eat Out to Help Out” led to “dishy Rishi” becoming a household name, and a popular one with the public.

At the height of this popularity, he was seen by many Tory MPs as the sure-fire favorite to succeed Mr Johnson when the time came.

But he seemed to fall from grace as quickly as he rose to fame.

Sunak introduced a number of policies which went down badly with Tory MPs, especially the rise in National Insurance to fund more money for the NHS and social care.

He was also fined for attending the prime minister’s birthday party during lockdown in 2020, compromising his ability to separate himself from partygate scandal.

But it was revelations about his wife that really damaged his standing with the public.

Ms Murty is a multimillionaire and daughter of billionaire NR Narayana Murthy – the co-founder of Indian technology giant Infosys.

In April, it was revealed she held non-dom status, meaning she did not have to pay UK tax on her sizeable international income, and it led to an uproar.

She later confirmed she would begin to pay tax on her international earnings as it had “become clear that many do not feel [the non-dom status] is compatible with my husband’s role as chancellor.”

The row led to opposition parties highlighting his family’s wealth, with Mr Sunak facing accusations that his personal circumstances made him an unsuitable candidate to take over and tackle the cost of living crisis.

Although he remained as chancellor, many wrote off his chances of becoming the next Tory leader.

The downfall of Mr Johnson meant that Mr Sunak’s leadership hopes would be put to the test sooner than many had expected.

After resigning in July, he launched his leadership campaign and MPs leapt to support him.

Mr Sunak came out on top in each of the five parliamentary rounds of the contest, making it to the final two along with Ms Truss.

But more and more of his colleagues began to file in behind his rival, and as the contest hit its stride, poll after poll of party members put Ms Truss ahead of him.

While Mr Sunak’s message has been one of caution, with a warning of “tough choices ahead” to tackle record levels of national debt incurred during the pandemic, Ms Truss has promised tax cuts as a priority.

Time and time again, he has sought to defend his position, accusing his competitor of “fairy-tale” economics and peddling “something-for-nothing” plans that even Jeremy Corbyn would baulk at, insisting they will see already record high inflation shooting further through the roof.

But Ms Truss has stuck to her guns, landing blows on Mr Sunak for putting taxes up to the highest level in 70 years and seeing more and MPs declare their backing for her. 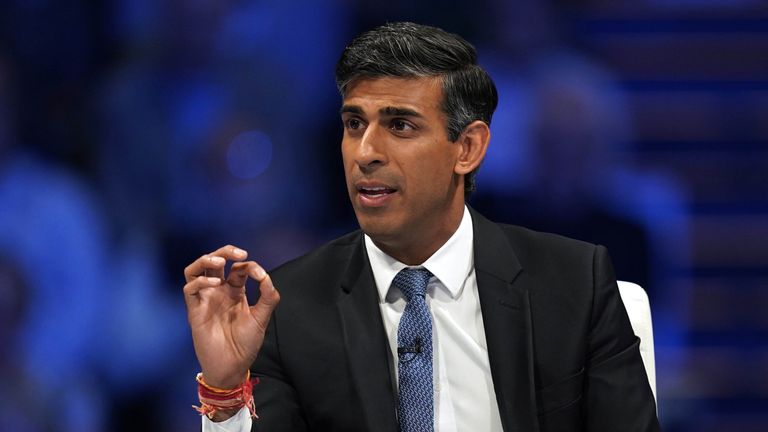 As the contest has rolled on, the cost of living crisis has become increasingly central to the debate, and Mr Sunak has continued to attack his rival’s plans, especially when she ruled out “handouts” for the worst off households.

Yet while his message seemed to be getting through to some of the public, Tory members seemed to still be staunchly behind the “Liz for leader” campaign, rather than being “Ready for Rishi.”

Having seemed like the favorite for so long, it appears that Mr Sunak is set to lose out in the battle for Number 10.

But to the last he has been insisting that the message he is hearing from members at hustings and events around the country is more positive than the polls are letting on and he is still in it to win it.

Come 5 September we will find out which of them was right.